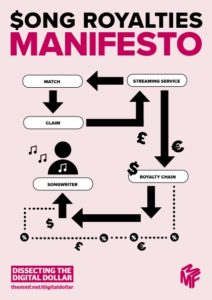 End the misallocation of writers revenues: “We need a glass box, not a black box”

Today at The Great Escape, the Music Managers Forum (MMF) will present an ambitious three-step manifesto that aims to address failing music industry systems and practices that are resulting in songwriters and composers losing out on hundreds of millions of pounds in streaming revenues.

While artists can be paid within two months of their recordings being streamed, because of structural inefficiencies in how royalties are collected and distributed it can take over two years for the music writers to receive their share of royalties – often after considerable deductions are extracted, and with the risk that significant sums of money are mis-reported and unallocated.

The MMF highlighted the negative impacts of these so-called “royalty chains” when unveiling our $ong Royalties Guide at 2019’s Great Escape as part of our long-running Dissecting The Digital Dollar initiative.

Three years on and, against the backdrop of a global pandemic, the underlying dysfunctions with music streaming are under renewed scrutiny. A high-profile DCMS Select Committee inquiry concluded that a “complete reset” of streaming was required to benefit music creators, while the UK’s Intellectual Property Office (IPO) has recently convened a number of pan-industry committees to explore market reform – including two working groups focussed specifically on transparency and data.

To help inform this work and deliver much-needed change, the MMF, in partnership with CMU, is today publishing what we believe are viable solutions to the problems identified in 2019.

Our long-term goal is to ensure the payment of song royalties is as quick, efficient and accurate as the payment of recording royalties. Writers should be paid no later than two months after a track is streamed.

By comprehensively overhauling how data is uploaded and collected, and by making that data easily accessible, we believe song royalties could be paid with 100% accuracy – eliminating the need for a digital “black box” – while transforming how music usage is reported, administered and accounted for.

Our three steps for action are as follows:

Step One: Immediate logging of splits and issuing of ISWC (the song code)

Picking up from the excellent Credits Due campaign, writers and their representatives must ensure song data is accurately logged with a universally-identifiable ISWC code before any recording is released.

Each new ISWC should be immediately available in a publicly accessible database managed by an organisation appointed by the music industry – not dissimilar to the database mandated in the US by the Music Modernization Act and now run by the MLC.

Make it mandatory for labels or distributors to provide ISWCs as part of the recording metadata supplied to streaming services on release.

In the longer term, streaming services should only accept recordings where an ISWC is included in the metadata. Provision of an incorrect ISWC with a recording should have a negative impact on a distributor’s ranking with the services, as is currently the case with other inadequate metadata.

Step Three: Provision of work ownership data to the services as standard

These data feeds should then be aggregated and made available through the publicly accessible database, enabling music services to identify ownership splits – and allowing them to pay licensors as promptly and accurately as they do with recordings.

The $ong Royalties Manifesto can be downloaded here and will be discussed in detail today at The Great Escape conference from 11am.

“Having revealed the serious structural problems with song royalty chains three years ago, we return to The Great Escape to present our three-step vision for change. Songwriters and composers are being failed by outmoded processes that drastically delay and reduce their streaming royalties. Each year, obscene amounts of money are being lost or mis-allocated. On the back of the important work being undertaken within the IPO, it’s imperative that the entire industry comes together to devise a permanent solution. We need to build better systems and instil greater transparency. We need a glass box, not a black box.”

“This manifesto is not an exercise in finger-pointing. It’s a call to action. And, in actual fact, it’s imperative that songwriters and their managers get the process of reform underway by ensuring splits are agreed and ISWC codes are accurately logged in advance of compositions being released. From there, we need the active involvement of music publishers, record labels, collecting societies and digital music services. Only with everyone working together can we fix the industry’s leaky pipes and ensure that the most important people in our business are paid promptly, transparently and efficiently.”

The MMF’s three-step manifesto has already won backing from across the industry.

“This manifesto is essential. Anyone representing a songwriter or using their work to make money can accept nothing less. In an age of data revolution and Blockchain, the journey of the 15% of song revenue received by writers for streaming being hacked apart by a lack of care in its data from day one is no longer acceptable. The song has rights, the songwriter has rights, and it’s time everyone who uses the work of a composer attaches every piece of code required to get them paid.

“Black boxes are not acceptable. Anything which seems unclear, inexplicable and hidden in an age of data speed and accuracy like we have never seen needs to be smashed. Profits being made by monies not reaching the correct recipient because the system let them down, a system they had no part in designing, has to end.”

“I wholeheartedly support the goals of the MMF’s manifesto. Thanks to concerted campaigning across the creator community, there is now undeniable momentum to reform the mechanics of music streaming. However, as well as ensuring a fairer share of revenue to writers, performers and producers, it is equally vital that the industry’s business structures and distribution systems are made efficient, transparent and fit for purpose.”

“We welcome MMF’s work in partnership with the CMU to produce the Song Royalties Guide and their latest three step plan. These are progressive steps to help address the issue of missing and late payment of royalties to songwriters. Missing song data is a key issue for The Ivors Academy and it is positive to see the proposals for solutions coming from managers, alongside the proposals being put by music publishers and others in the industry. Awareness is growing through the Credits Due campaign and the MMF’s manifesto to create positive change so that the right music creators are paid for their work.”

“I fully endorse the MMF’s $ong Royalties manifesto, and it’s common sense roadmap for change. In the digital era, there should be no excuses for songwriters not being paid quickly, transparently and efficiently, wherever their compositions are streamed.”

“This is an important and timely report. Without songwriters there is no music industry! They are being failed and overlooked continuously as if their efforts are a secondary factor in an industry built around their work. It’s unacceptable that songwriters can be kept waiting years before receiving their streaming royalties, and I sincerely hope the wider industry can rally behind these recommendations for change.