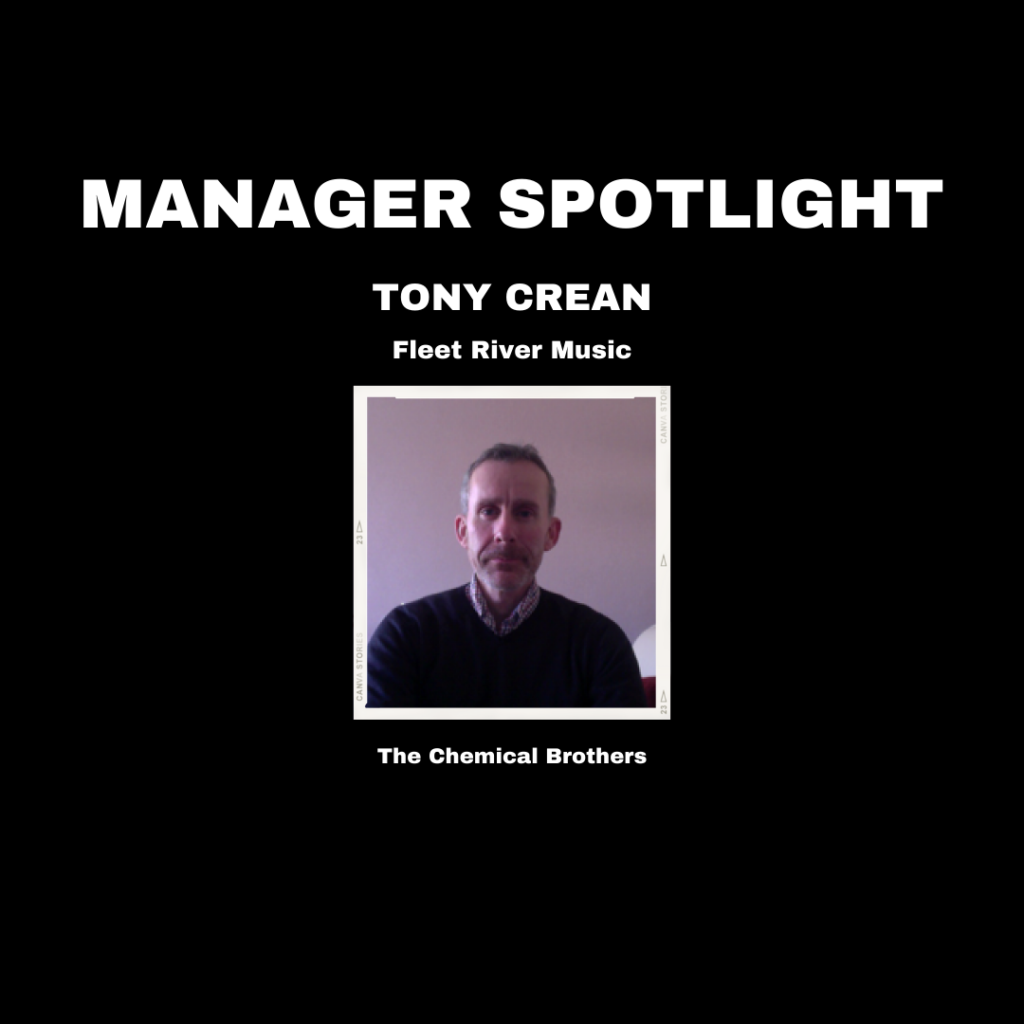 Manager Spotlight offers a small insight into the heads of incredible managers. This week in the spotlight is Tony Crean!

20 years, still not sure how that happened, before that I worked for indie labels in press and marketing for 10 years.

I work with Fleet River, mainly as part of The Chemical Brothers management team, over the years artists worked with have included Hot Chip, The Avalanches, Alexis Taylor, The 2 Bears, Ladytron, Goldfrapp and The Shortwave Set.

First management job was Goldfrapp, after a meeting with Mute’s Daniel Miller who sold me on them before I’d heard a tune, then by chance a very old mate Dave Harper asked me to help him out for a bit on the management, worked with them for 10 years and am still amazed by the music they create, proper artists, taught me a lot about respecting the musicians creativity and fighting their corner (while holding your own…;)

A bad day is one spent on email, fire-fighting or problem-solving. A good day is one spent probably doing the same, but face to face, seeing plans work out, and music being heard. And being at a gig with mates.

Watching The Chems blow Glastonbury and the O2 away last year. Hard to even begin to describe those shows in these days. One day soon.
Before that, probably getting to work with Van Dyke Parks on second The Shortwave Set album (a great lost classic). Goldfrapp at the Albert Hall.
And the new album by The Avalanches means a lot too.

What do you think are the big challenges for a manager in 2021?

Where to start…getting paid, keeping positive, connecting to a real audience, probably most important is maintaining audience & media attention on the artist which was hard enough before and is now a real challenge, has to be  turned into a driver of creativity and quality.

Promised myself once again that this would finally be the year that I properly got into jazz…so a fair bit of Coltrane as well as a lot of the new UK stuff as recommended by my friends at Sounds of the Universe.

And mainly been kept going by the great djs and selectors every night from The Social (@sociallondon), especially the ace @petefowlerart who has done every friday since start of lockdown 01, plus James Endeacott in the mornings on Soho Radio, and all the great records the legendary Heavenly Records keep putting out (check out Katy J Pearson, Working Mens Club, Caixa Cubo and the brilliant book ‘Believe in Magic – the first 30 years’ by Robin Turner).

Plus the great ambient series by Richard Norris and Night Tracks on Radio 3 (and pretty much anything by Hannah Peel). And that new Avalanches album. Genius and properly life-affirming in the very best way.

Anything that does the job the hour demands.

As Mr Weatherall said, Fail we may, Sail we must.

Keep on keeping on, thanks to the MMF for all the support as ever.