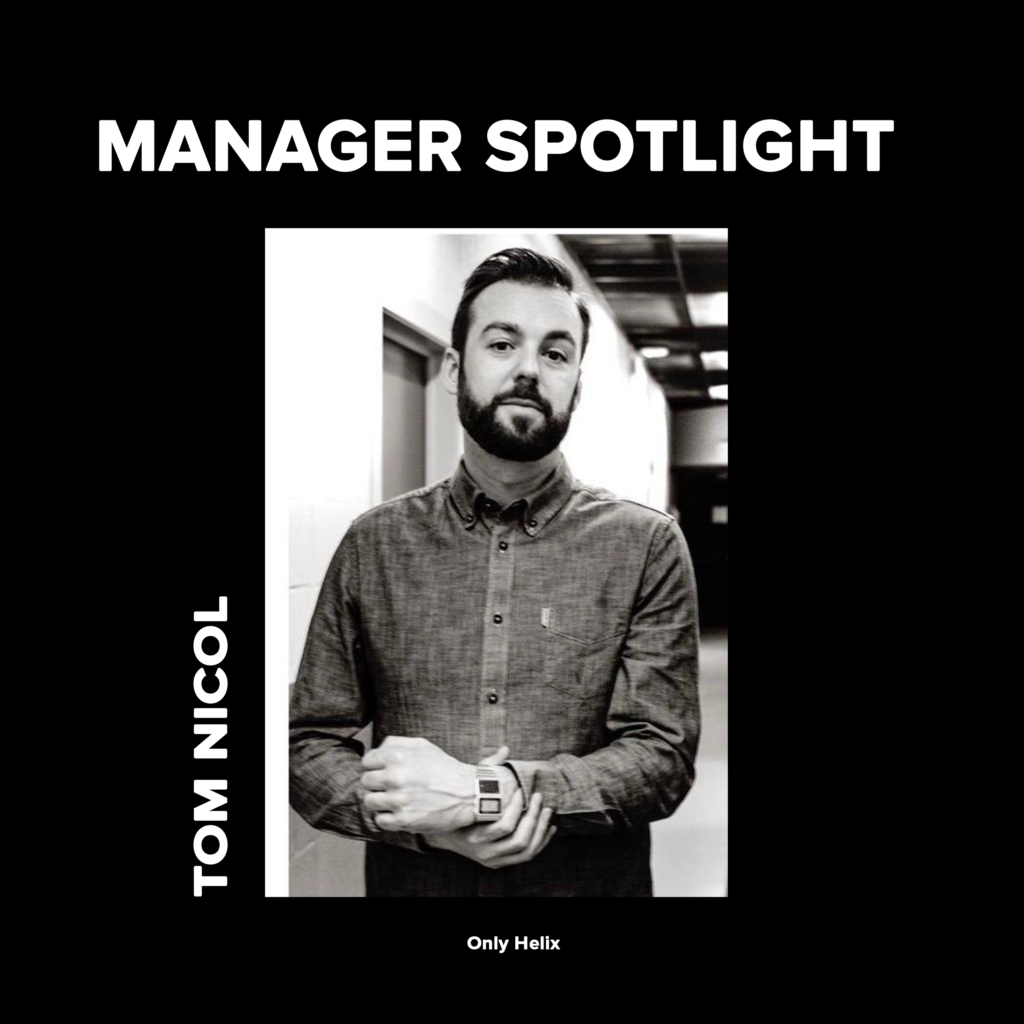 Manager Spotlight offers a small insight into the heads of incredible managers. This week in the spotlight is Tom Nicol!

How long have you worked in Management?
Personally, my career in management is relatively new, but the wider Only Helix collective has management experience that goes back fifteen years. I’ve tour managed Years & Years, The 1975, Of Monsters and Men, Anne-Marie and Savages to name a few, so have been fortunate enough to learn from some of the best managers out there. Only Helix has been a production company for a while and decided to grow the management leg about twelve months ago after working with some artists we got really excited about.

Only Helix looks after a mix of new and more established artists, spanning across producers, writers and performers, many of whom also work collaboratively with each other on projects. Steven Down and I are working closely with Andy Spence a like minded manager with a wealth of experience combining our strengths. Currently on our roster we represent Beanie Bhebhe (Artist/songwriter), YinYang (Artist),  Ashton Miranda (Songwriter/producer/MD), Tom Cane (producer/MD) and Alex Arcoleo (producer).

Where did you find your first client and what inspired you to take them on?
Working as Anne-Marie’s TM I met Ashton Miranda her musical director and was instantly drawn to his musical talents. The first time he played me a Charlie XCX remix he’d done I was blown away with the possibilities and how fun it could be to work with him. Ashton has remixed some of the biggest artists out there such as Ed Sheeran, Rudimental, Mabel and Clean Bandit clocking up millions of streams. What excites me the most is his song writing, I truly believe he will be one of the biggest songwriters coming out of the UK in the next couple of years. We’ve worked together in so many guises now that we’re well aware of each other’s way of working and how best to work together which makes it a great combination.

What’s a good/bad day at work look like for you?
The last ten months or so have been a bit of a different beast, the lack of live shows and touring has meant theres been a lot more time to focus on new projects in development, and be around more to invest time in Tom Cane and YinYang who are really starting from scratch. A lot of time on the phone, and in the studio when we’ve been able to do that safely, and just generally a lot more time with the artists themselves (mostly virtually of course) which has been really productive.
A good day is when you feel like something has really been finished.

What has been the highlight of your management career to date?
Finding new artist Yinyang and putting her into the studio with Tom, Laurens first single has attracted R1 love, 2021 is going to be a great year for her.

What do you think are the big challenges for a manager in 2021?
Live is a huge part of an artist’s income, and so the big question mark over when touring and live shows will be back is going to cause a lot of challenges, particularly for brand new artists of course. The sheer volume of new music being released independently or through labels online in the last 6-10 months too has meant that it’s a pretty challenging marketplace. Getting people out there and noticed is going to be tougher too, which is saying something.

What music are you currently listening to
Christmas at home was a great time to revisit a lot of classics like Chemical Brothers, Four Tet and Bicep. Deftones latest record has been my go to when running. Otherwise Rival Consoles, Ben Lukas Boysen, and actually anything on Erased Tapes always has time in our house. Fontaines D.C. were a firm favourite of last summer and Jehnny Beth’s ‘To Love is to Live’ and Sigur Ros ‘Valtari’ have been played more than is cool to admit over the past few weeks. Looking at it, it’s quite a moody playlist.

Only Helix are looking for like minded managers that have a passion for music and already work with uncompromising artists to become a member of a new management collective. If you would like learn more get in touch with Tom on tom@onlyhelix.com.