Home / Education / MMF Guide: How to check your streaming royalties
< Back to articles

MMF Guide: How to check your streaming royalties 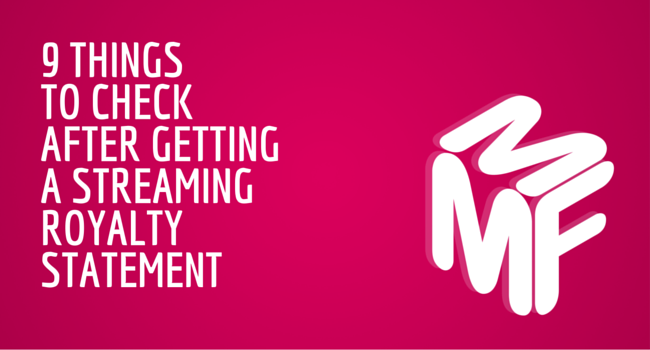 You can download a PDF copy of this guide here.

Streaming continues to establish itself as the future of music consumption but, every now and then, the format finds itself in the headlines for the wrong reasons. When streaming platforms are taken to task in the media, it’s usually by acts who aren’t satisfied with the bottom line on their royalty statement after racking up what they feel are significant play counts across various platforms.

While it’s important for artists and their managers to be vocal about the economics of the modern day music industry, it’s vital that any claims are informed by accurate data and a full understanding of the various factors that can affect that final streaming payment.

Complicated contracts, NDA cultures and a host of other factors mean that artists and their managers are often unable to see exactly how royalties from streaming platforms flow to their bottom line – and where revenue is diverted at various points of the chain.

The MMF continues to fight for increased transparency across the industry, particularly within the major record labels, with the recent publication of our Dissecting The Digital Dollar report being a step towards that goal. 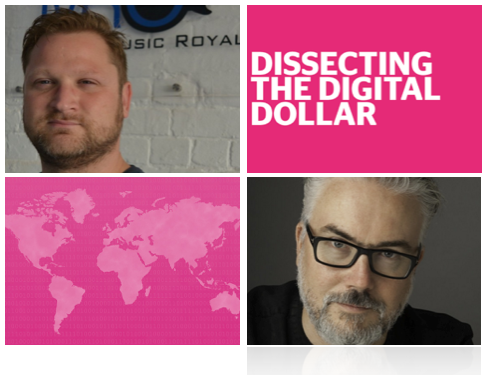 Until real change is achieved, however, we’ve enlisted the help of The Music Royalty Co’s Ray Bush and accountant Nick Lawrence to draw up a list of factors which may affect your

streaming royalties, and key questions to ask when looking at your statement before crying  foul to the press.

1. Are these your publishing or master royalties?

When analysing  your streaming income, establish  whether the money has come from the licensing of master rights or publishing (if you wrote the song). Remember that publishers receive up to 20% of streaming revenue that comes back to the industry, while labels receive the other 80%.

Generally speaking, any revenue from the licensing of masters is received by the record label. The way in which income is then allocated is governed by the contract you signed with them. The artist will receive the money in quarterly or semi-annual accountings but only if you’ve recouped the advances paid upon signing. Check the wording in your contract on your digital income royalty percentage as well as recoupment arrangements and whether any of your digital income is being recouped against other forms of revenue. Any ‘interactive’ streaming platform (ie. services such as Spotify) is dealt with in this way. The tiny portion of digital income classed as ‘non-interactive’ (from linear internet radio services) is handled by a neighbouring rights society such as PPL. In that case, artists will receive income direct from them and it is not subject to recoupment of label advances.

Publishing rights are more complex, mainly because publishing is split into two rights – the right to perform and the right to reproduce – and they are licensed in different ways. The performance right is licensed by a Collective Management Organisation (such as PRS in the UK) and you receive the income directly from them. If you have signed a publishing deal for your songs then the publisher will receive a share of that money as per the contract. If not you keep it all.

The mechanical right is licensed by the MCPS or your publisher. Again, if you have signed a publishing contract it will be split as per the contract, but the publisher will get to keep all of the mechanical income until any advance has been recouped.

As you can imagine, the amount of streaming revenue an artist sees at the end of the chain on any given statement will be affected by whether that income relates to publishing or master rights and the agreements in place with the record label or publisher.

2. Which royalty statement is it? CMO or publisher?

As mentioned, if you are a published writer your performance income will flow through PRS and your mechanical income will come via your publisher. It is important to remember that the share of performance/mechanical income per stream depends on whether it is fully interactive (Spotify) or partially interactive (listen again internet radio). And the rules about such a split vary from territory to territory, depending on the local CMO.

Remember, if you have signed a publishing agreement, your publisher will take a percentage depending on what you have negotiated and may recoup some of the royalties against any advance.

4. Which platform is the income coming from?

As previously mentioned, there is a difference in the way various streaming services are licensed. A lot of the time on statements, digital royalties are lumped together, which can make them difficult to analyse. In any contracts you sign, ensure that digital royalties are accounted for per platform.

“Creating and maintaining a schedule of all commercial relationships can act as a useful document to verify arrangements,” advises Nick Lawrence.

The size and overall revenue that a streaming platform generates may also affect the return to artists. “Sometimes you get better rates on smaller platforms but you don’t get as much money on the bottom line,” says Ray Bush. “And, on some bigger platforms, you may see your views going up but your earnings going down because they split the pot across all artists – so the more artists they take on the more you have to share with other artists.”

5. Which territory is being accounted for?

Figures on royalty statements can be misleading as they might only apply to one territory – although it may not always be clear. Make sure you know whether the figure applies to global income or specific territories such as the US or UK.

“It’s also important to be aware how much of a fee your distributor or aggregator is taking in each territory,” says Bush.

6. Which time period is being accounted for?

Although income flow is improving all the time, it can take up to two years for royalties to reach the artist. This could mean that, although you’ve had 4 million plays on a certain track, the first statement you receive may only show income at a point when the song had 5,000 plays. The rest of the income will get to you, it will just take time. If you notice large discrepancies, however, talk to whoever is accounting to you.

The time it takes for income to be accounted for is a matter of contention in itself. “Typically, artist accounting is dealt with twice yearly by March 31 (covering prior period July 1 to December 31) and September 30 (covering period January 1 to June 30),” explains Lawrence. “Considering the digital age we work in, it seems out of step to wait up to nine months to be in receipt of much needed income. Some organisations have improved these terms to account quarterly, but we need a sea change to create fairness.”

7. Be careful with comparison to radio and/or sales

It’s tempting to compare the royalty you get on a single stream to the payment you’d receive for a spin on the radio – but don’t. Streaming and radio are two entirely different platforms with different models, audiences and royalty structures.

Again, it’s also difficult to compare radio and streaming statements directly because of the time it can take radio money to come through. “The data isn’t live and it doesn’t run concurrently with streaming,” explains Bush. “You’d have to have five years of accounts before being able to compare the two alongside each other, and even then it’s difficult.”

Some will argue that streaming is more of a promotional tool and therefore comparable with payments from radio while others will call it an income generator, which makes it more akin to sales. The MMF advises that it is neither. We are in a new world and streaming is a completely new concept. Therefore, it should be treated as such and sit in a bracket of its own.

8. Are all your tracks accounted for?

It’s tempting to simply scan a royalty statement on your way to the bottom line. With a little more scrutiny, however, you might find that a lower than expected final payment can be explained relatively easily.  “When you get a statement of any description, people normally just trust it, and that can be dangerous,” warns Bush. “Because of the micro detail we’re talking about, it could just be that a track is missing and you simply haven’t noticed. If you’ve got an album on a streaming service with 12 tracks, are all 12 tracks on there?”

Google’s giant video platform is often referred to as the biggest music streaming platform in the world, but the fact that much of its content is user generated sets it apart from the likes of Spotify, Deezer and other streaming services. If someone uses one of your tracks to back their video, it’s up to you to monetise it. Be aware that around a quarter or even a half of the lines in a YouTube statement could point to videos that are yet to be monetised, meaning they are lines of zero value.

“The reports tell you what’s out there that can be monetised,” says Bush. “It’s basically Google saying, ‘There’s money there, go and register it’. You either need to ask your distributor for the non-monetised lines from YouTube, or be looking for those if it comes to you directly.”

Whatever your level of streaming activity, to achieve the optimum financial outcome, appointing the right business manager and accountant is critical from the start, suggests Lawrence: “They will know what to look out for and when. Ensuring you have access to the necessary skills and experience is essential  to make certain your earnings are collected in full. Operating blind here can be risky and artists should be left to create – not administer.”

To join the debate around digital transparency contact us.

Still got questions about your streaming royalty statement? MMF members may contact Ray Bush from The Music Royalty Co, who will be happy to talk about how he can help. You can email him at ray@themusicroyalty.co.uk. Music industry accountant Nick Lawrence can be contacted on: nick.lawrence@nwnbluesquared.com.