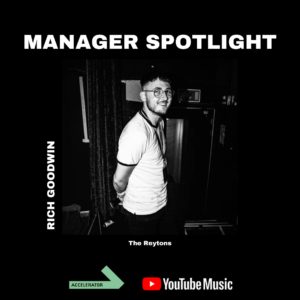 This week in the spotlight is Rich Goodwin! The Manager Spotlight offers a small insight into the heads of incredible managers.⁠

How long have you worked in Management?
I started working in management way back in 2018, alongside developing artists through live strategy and creative.
Who do you manage now?
I’ve been working with Rotherham indie band The Reytons since the very beginning of my career in management, around August 2018.
Where did you find your first client and what inspired you to take them on?
The Reytons were also my first artist – beginning life as their promoter, it quickly became apparent that something was really special about this band (selling out 500 tickets in their hometown less than a year into their career gives that away). I also was really attracted to their tireless work ethic and fearlessness in what can be a very unforgiving industry. We’ve all grown alongside each other and it’s gone from strength to strength.
What’s a good/bad day at work look like for you?
I love touring and as a DIY independent band who focus a lot of our energy on live, we get to do that a lot! So I’d say each day we’re out on the road, visiting new cities and taking on new challenges is always a good day. I like to be hands on. In contrast, nobody really likes doing the admin do they? I’ve had the unfortunate displeasure of wrestling with touring carnets lately! But it’s a necessary evil that feeds the good days!
What has been the highlight of your management career to date?
There’s been a few! Charting The Reytons’ debut album at No 11 is up there – we sold over 8,200 units so it was disappointing not to get that Top 10, but based on our competition on release week, that’s the nature of the beast! Another huge moment was definitely headlining the iconic 4,500 capacity Magna in Rotherham for our last headline show, selling it out in only 10 hours of general sale. Special.
We’ve since announced the second album ‘What’s Rock And Roll?’, set for release on 20th January and releasing 100% independently. We also revealed that we’ll be headlining the 13,500 capacity Sheffield Arena next September, with over 70% tickets selling in the first week, it’s going to be special!
What do you think are the big challenges for a manager in 2023?
One of the big ones is undoubtedly leading your artist out of the pandemic. Luckily we’ve managed this well, with a strong live presence and loyal following, however I know it’s not always that easy for everyone. I also think the cost of living crisis is also being slightly overlooked – not only is it going to affect artists who live off the income of the band, but also a large proportion of fans, so it’s something worth bearing in mind when scheduling new shows and releasing new music and merchandise.
What music are you currently listening to?
There is so much to listen to at the moment, and great stuff coming out from new artists too. So hard to choose, but I’m going to go for the Whitburn lads The Snuts and also Bradford artist Blazer Boccle, who’s stormed onto the scene lately with his cracking new EP.

With the finish line in sight and Christmas looming, I wanted to send a quick note of thanks for your Read More