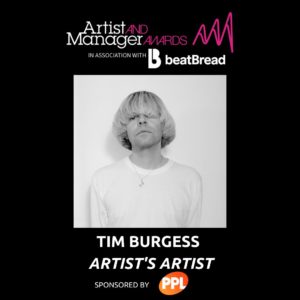 The Featured Artists Coalition (FAC) and Music Managers Forum (MMF) are delighted to reveal that TIM BURGESS will be crowned Artists’ Artist at the 2022 Artist & Manager Awards in association with artist funding platform beatBread.

The Award, which is sponsored by PPL, recognises Tim’s creative achievements over an incredible 30+ year career, both as frontman for The Charlatans and as a solo performer.

From their burst of influential, era-defining keyboard-driven anthems, including The Only One I Know and Weirdo, via a run of classic mid-90s hits – One To Another, North Country Boy, How High, Forever – The Charlatans remain one of Britain’s best-loved bands.

Underpinned by Tim‘s unique and leftfield lyrics and his sheer enthusiasm for music, they have accumulated 3 number one albums, alongside a string of Top Ten successes. Their most recent, 2015’s Modern Nature and 2017’s Different Days, both added substantially to the band’s live repertoire, including fan favourites Come Home Baby, Let The Good Times Be Never Ending and Plastic Machinery.

Encouraging mass-participation album replays over Twitter in the company of the artists who made them, what started off as an antidote to lockdown isolation is still going strong. To date, more than 1,000 online parties have taken place, bringing fans together from all over the world.

Widely recognised for his artist activism, Tim has been a huge supporter of the FAC’s 100% Venues campaign, and an Ambassador for Love Record Stores Day and Independent Venue Week. A true maverick talent, an unsung musical hero, and a force for good – the FAC and MMF are delighted to recognise his achievements with this award.

“Quite rightly, Tim Burgess has won major recognition over recent years for the generosity and camaraderie of his Listening Parties, and also for some pretty selfless activism on behalf of his fellow artists. While acknowledging this important work, his Artists’ Artist Award is predominantly focussed on an incredible life in music. There aren’t many individuals who’ve fronted the same band for over 30 years, and there’s even fewer who’ve kept innovating and pushing forward with the same level of enthusiasm. Whether with The Charlatans, as a solo performer, or as a collaborator, Tim always brings something new and is always worth listening to. The British music scene would be much poorer without his influence, and the FAC is delighted to honour his career achievements.”

“Tim Burgess is a worthy winner of the Artist’s Artist accolade, with a catalogue that reflects his standing in UK music – thirteen albums with The Charlatans, six solo albums, his own record label and numerous collaborations with some of the most well-known UK artists across the 90s, 00s and 10s. He champions music with an equal passion. He has been an ambassador for grassroots venues and independent record shops, and, in his listening parties, has built a platform that showcases hundreds of artists at every stage of their career. PPL is proud to recognise his contribution to our industry, which would be much poorer without such dedication and enthusiasm. Congratulations and thank you Tim.”

With the ceremony taking place on Thursday November 17th at the Bloomsbury Big Top, we can also confirm that the Artist & Manager Awards in association with beatBread will be hosted by the one and only Doc Brown aka Ben Bailey Smith.

Starting off as an underground rapper, Ben is now widely acclaimed for his mainstream TV and film acting, stand up, screenwriting and children’s books. Alongside a starring role in ITV’s Law & Order, his TV work includes C4’s The Inbetweeners and Derek, BBC thriller Hunted, BBC comedies Rev, Miranda, Fleabag, Russell Howard’s Good News, Live at the Apollo and ITV’s Midsomer Murders. He is also highly regarded for his ongoing work with Ricky Gervais.