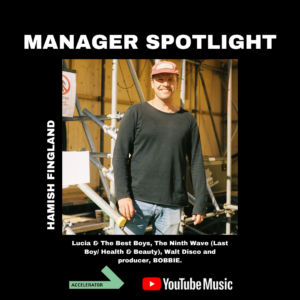 How long have you worked in Management?
6 years

Where did you find your first client and what inspired you to take them on?
7 years ago at Glasgow’s multi-venue Festival, Stag & Dagger, I discovered a new wave of amazing bands coming through like The Lapelles, The Vegan Leather and The Ninth Wave. Coming from an artist background, belonging to Glasgow’s music scene, I loved what this younger generation of bands were doing together and decided to take on the ‘big brother’ role to The Ninth Wave. My time as an artist was up and these new kids on the block were smashing it! I shared experiences, mistakes and showed them an entry point into the wider industry. I always think to myself if my old managers hadn’t shown me a way in where would I be now – no one in my family works in the industry and I had no idea where to start. The big brother role soon grew to being the manager and now we’ve gone through three EPs, two ‘Scottish Album of the Year Award’ nominated records and I look after The Ninth Wave’s upcoming projects, Last Boy and Health & Beauty.

What’s a good/bad day at work look like for you?
A good day is being on top of everything, having slept well and listening to new material coming in from my acts. A bad day is filling in forms for foreign withholding tax, finding where tour support disappeared too or delivering bad news.

What has been the highlight of your management career to date?
Bringing to life Walt Disco’s vision for their album Unlearing with Lucky Number was super creative, we made something special pushing far beyond the norm. Watching Walt Disco grow personally and creatively has been an honour. They work in a personable and humble way and are a gang who they look after each other respectfully. I have to cheat here though, for one more highlight. Signing Lucia’s album deal to Communion, a team who adore her and her music has been a joy. She is a force to be reckoned with and hasn’t stopped for a minute over throughout the pandemic. Over the last two years Lucia blossomed, she has written her best music to date and she and her band The Best Boys played the best shows of their lives alongside Wolf Alice on tour. The first night at The Barrowlands was a highlight which really woke me up to what she has become. She has just started recording her debut album and I feel like what is bubbling there is going to be a massive highlight for me.

What do you think are the big challenges for a manager in 2022?
Keeping your mental health and work/ life balance in order whilst staying on top of all the Brexit stuff and learning as you go. Finding the time to know everything yet still forward plan is hard at the moment.

What music are you currently listening to?
Stevie Nicks, Richard Hell, Bronski Beat, Sebastian Tellier, The Streets, The Notorious B.I.G.