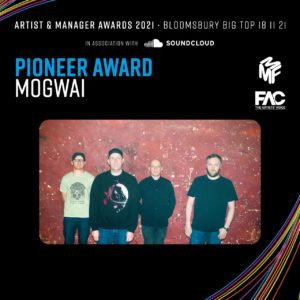 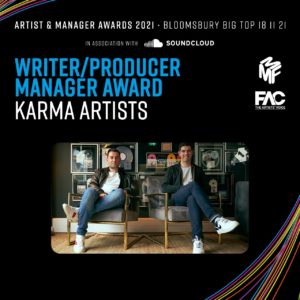 The Featured Artists Coalition (FAC) and Music Managers Forum (MMF) are delighted to reveal that Mogwai and Karma Artists have been added to the winners roll call at the 2021 Artist & Manager Awards.

Hosted in association with SoundCloud, the Awards ceremony takes place at London’s Bloomsbury Big Top on Thursday 18th November and will be hosted by Capital FM’s Roman Kemp.

As previously announced, other winners at the prestigious event which celebrates achievements in the artist and manager community include Elton John and David Furnish (Artist & Manager Partnership Award, sponsored by PPL), Little Simz (Artist of the Year, sponsored by Amazon Music) Amy Morgan, September Management (Manager of the Year Award, sponsored by YouTube Music) The Black Music Coalition (Industry Champions) and Grace Ladoja MBE, Metallic Inc (Entrepreneur Award). Winners of the Breakthrough Artist, sponsored by Spotify, and Breakthrough Manager categories will be announced on the night.

Twenty-five years since they formed in Glasgow, 2021 provided Mogwai with their first ever UK number one album, As The Love Continues – testament not only to the band’s artistic excellence, but also their enduring influence and uncompromising template of sonic beauty combined with the darkest humour. Mogwai are somehow both otherworldly and resolutely human. One peek at the track list (“To The Bin My Friend, Tonight We Vacate Earth”, “Ritchie Sacramento”, “Fuck Off Money”, “Ceiling Granny”) and you just “know” who created this album. Shortlisted for the 2021 Hyundai Mercury Prize Album of the Year, earlier this month As The Love Continues deservedly won the Scottish Album Of The Year Award.

Flying the independent flag through their ownership of Rock Action Records, also home to other similarly singular talents including Arab Strap, Kathryn Joseph, The Twilight Sad and Part Chimp, Mogwai have continued to break new ground – soundtracking films including Zidane: A 21st Century Portrait, plus The Fountain, and Before The Flood collaborating with Clint Mansell, Trent Reznor and Kronos Quartet. The band’s 2020 soundtrack for the Amazon Prime, Sky Atlantic and Canal + series ZeroZeroZero was released initially via Bandcamp with 50% of first week proceeds being donated to charities including Help Musicians.

Returning to live shows with a headline appearance at this year’s Green Man Festival, Mogwai follow a handful of dates this November with a world tour in January 2022, encompassing shows across Europe, Mexico, North America and Canada. The FAC and MMF are delighted to recognise their pioneering quarter century at the Artist & Manager Awards.

“Not many artists achieve a number one album in their twenty-fifth year of existence, and fewer still continue to push creative boundaries after that length of time. Mogwai are one of these exceptions. I am absolutely delighted the band will receive our Pioneer Award in recognition of their stunning catalogue of work, their reputation as live performers and all-round sheer bloodyminded spirit of independence.”

Joining Mogwai as winners are Karma Artists, who will pick up the Award for Writer/Producer Manager.

“Within the industry, I don’t think we’ve ever seen such a profound focus on the importance of writers and producers as we have over the past 18 months or so. The managers who represent this bedrock of talent also deserve to be recognised for their tireless investment and development, and, as they approach a major milestone anniversary I’m really pleased we can celebrate the achievements of Jordan, Ross and the entire Karma team. MMF will also continue to shine a light on the vitally important role of writer/producer managers in our upcoming Managing Expectations report.”

The Artist & Manager Awards is co-promoted by the FAC and MMF. The event is produced by Oli Bartlam at Full Fat Events, with commercial strategy overseen by Romano Sidoli. For sponsorship opportunities, please contact Romano here.
Full details of the Awards can be found here. Further winners will be announced shortly.