Home / Associates / FAC and MMF reveal Artist of the Year and Entrepreneur Award Winners for AMAs 2021, alongside Breakthrough Artist and Breakthrough Manager nominations
< Back to articles

FAC and MMF reveal Artist of the Year and Entrepreneur Award Winners for AMAs 2021, alongside Breakthrough Artist and Breakthrough Manager nominations 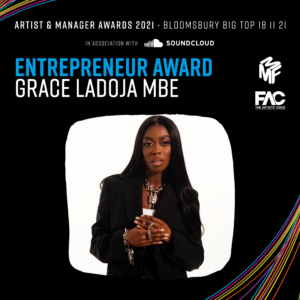 The Featured Artists Coalition (FAC) and Music Managers Forum (MMF) can reveal that Little Simz will be crowned our Artist Of The Year at the upcoming 2021 Artist & Manager Awards, in association with SoundCloud, on Thursday the 18th of November.

Already one of the UK’s most widely respected talents, Little Simz’s fourth album, Sometimes I Might Be Introvert, has elevated the London-born artist to another realm entirely – generating genuine global acclaim while pushing her sound forward in a coherent collection of tracks that combine collaborative innovation with highly charged and personal lyrics. “A master storyteller who raps with wisdom and heart,” said the New York Times, “19 tracks of pure authenticity and creativity,” added NME, “a landmark album from one of the UK’s most brilliant rappers that explores the difference between public perception and the private self,” according to Resident Advisor.

Fiercely independent (she still releases on her own Age 101 label, via AWAL) nobody does what Simz is doing. And that’s before you add in a lead role in Top Boy, Sault, the triumphant appearances at End of the Road and All Points East, or the record breaking upcoming three-night run at London’s Brixton Academy.

A true British original, she remains a benchmark for integrity and artistic excellence and a deserved winner for her achievements in 2021. The Artist Of The Year Award is sponsored by Amazon Music.

“We’re thrilled to partner with the 2021 Artist & Manager Awards and to support such a prestigious category. Little Simz has had an incredible year with a meteoric fourth album and a  summer of back-to-back standout shows. I can’t wait to see what she does in 2022.”

The FAC and MMF are also delighted to announce that Grace Ladoja MBE, co-manager of Skepta and Sarz, and co-founder of Metallic Inc, is the winner of our 2021 Entrepreneur Award. A key figure in building bridges between Nigeria and the UK, Grace’s development of Metallic as a global studio that specialises in music, culture and brands has seen her work extensively with the likes of Nike and Supreme, as well as delivering groundbreaking campaigns for her artists and founding the annual Homecoming Festival in Lagos.

A celebration of cultural heritage and creative exchange across music, fashion, sport and art, Homecoming also promotes youth education and economic independence, while Grace herself stands as an hugely inspirational female figure in music, receiving Music Week’s Rising Star Award for Women In Music in 2017.  In 2020, Grace started the Metallic Fund to support young black creatives and entrepreneurs, offering both grants and mentorship to individuals and businesses.

In addition to these two amazing recipients, we are also today revealing shortlists for the hotly contested Breakthrough Artist and Breakthrough Manager categories, with the winners announced on the night of the Awards. These are as follows:

“Spotify is the number one destination for new and emerging artists and artist discovery, and new talent is the bedrock of music culture, so we’re delighted to be sponsoring the Breakthrough Artist Award at this year’s event. Our global emerging artist programme RADAR is testament to this and it’s incredible to see such a diverse and creative line up of artists nominated for this award. From RADAR artists Griff and Central Cee to Becky Hill, who is the face of our EQUAL initiative to foster equity for women in music. We look forward to celebrating with these artists and their teams on November 18th.”

Celebrating achievements in the artist and manager community, the Artist & Manager Awards returns to London’s Bloomsbury Big Top on Thursday 18th November. Headline sponsors for the event are SoundCloud, while the ceremony will be hosted by Capital FM’s Roman Kemp.

As previously announced, the event will also see Elton John and David Furnish honoured with the prestigious Artist & Manager Partnership Award, sponsored by PPL. Amy Morgan (September Management) will receive the Manager of the Year Award, sponsored by YouTube Music, while The Black Music Coalition have been named as Industry Champions.

Providing additional glamour to the event, we can confirm that this year’s Awards will feature a very special red carpet reception, courtesy of luxury boutique jewellery studio A Jewellers. With more than 250k Instagram followers and a client base that includes some of the world’s most prominent musicians, entertainers and sportspeople, A Jewellers have been described by GQ Magazine as “the go-to jeweller for AJ Tracey, Aubameyang and Krept & Konan.”

“We are very excited to partner up with the Artist & Manager Awards to celebrate the incredible talent and their teams in the UK right now. As a brand, we’re all about championing the very best and shining a light on those killing it in the industry so it naturally made sense to be part of this major event. A big well done to all nominees – see you on the night, we have a little surprise prepared for you all.”

A range of table and ticketing options are available now. To book, please email lovisa@themmf.net.

The Artist & Manager Awards is co-promoted by the FAC and MMF. The event is produced by Oli Bartlam at Full Fat Events, with commercial strategy overseen by Romano Sidoli. For sponsorship opportunities, please contact Romano.

Full details of the Awards can be found here. Further winners will be announced shortly.