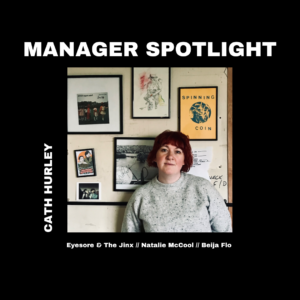 Manager Spotlight offers a small insight into the heads of incredible managers. This week in the spotlight is Cath Hurley, mostdeffo.

How long have you worked in management?

I’ve worked in management officially since October 2018. I’ve worked for quite a long time in the music industry before this, and it’s always something I really wanted to do, but never quite had the confidence to take on. It can feel a daunting prospect to be over every element of what is going on with an artist, but I think the gradual build up of my involvement with projects over my career has put me in a good position.

I used to do online pr in London and would often be the first team member working with an artist due to how much growth potential there was for new acts back then with blog and website coverage. I’d most often end up supporting these bands and artists further and often shaped release and sometimes live strategy. I then became a product manager, which I loved but I was always aware that I represented the label rather than the artist and I don’t think it came as a surprise to my bosses that I went into management after I left and moved to Liverpool.

I’ve been in Liverpool for 5 years now and I took a while looking at what was going on up here objectively to see what value I could add. Management felt like a really obvious choice as I got more immersed in what was going on. Management and artist development, basically. I set up mostdeffo to really be a home for acts that I worked with directly and further promising musicians who needed some support, validation and someone to just do a bit of myth-busting.

I have a perfect trio of acts that I adore. I work with a 3-piece garage post-punk  band called Eyesore & The Jinx. We’ve enjoyed wonderful trips such as a fly-by Eurosonic and also that time we went to Russia to play a couple of festivals in and around a city called Ulyanovsk. I work a musician who can bend her head to all sorts called Natalie McCool. She’s a sick guitarist and singer songwriter who has just released a new album and is moving down to London soon to build her craft as a producer. I also work with a very special artist called Beija Flo, who burns very brightly in lots of different of ways as a performer, songwriter, poet, illustrator, photographer, actor, activist and general all-encompassing creative queen.

Alongside this I am a co-manager of a new community music venue called Future Yard in Birkenhead. When I first wrote down the ambitions of what I wanted to turn mostdeffo into (at about 4am whilst on a solo holiday back in 2017), I rather grandiosely wrote about building a supportive community of musicians who felt empowered to carve their own path through the industry. One of the ways of doing that was a plan to bring in loads of amazing people that work in wonderful ways that would be really inspiring and open a lot of eyes very wide. Future Yard is a home for that whole ambition. I oversee our industry skills training programmes (providing routes into working in live music)  along with PROPELLER, which is an artist membership that provides loads of support and knowledge to special artists. It’s mad to be able to bring that kind of infrastructure and build that community in the town I was born in. Working in management is super important to me as it ensures I retain that real life experience of navigating the industry as it constantly evolves.

I met Eyesore & The Jinx whilst taking part in an artist development scheme. They’d released their first single and I picked apart the activity around it, quite honestly. In their words I was “brutal”, but they were in a position to take constructive criticism super well and build from it. By chance I saw them supporting Protomartyr the same evening and could see something special in the tracks that they had at that time. They made a lot of sense to me. We met up the following week to have a proper chat and it just so happens I was in the process of making mostdeffo into a business. We started working together shortly after that and started to build a really great collaborative and trusting relationship pretty sharpish.

There’s always a lot going on, so even when certain things aren’t quite going the way I want them to go, there’s always something else that’s positive to keep the spirits up.

I guess a bad day is when nothing happens. Any effort that is put in doesn’t result in any responses or actions. A good day is when inspiring conversations take place, along with seeing something developing and growing and imagining future possibilities. It’s important for me to always look forward. If something great lands, then it’s thinking about how to use it as a stepping stone and moving forward. I don’t think you can ever really stay still, can you.

I think that’s difficult to pinpoint. The moments that spring to mind are the ones that seem like you’re punching above your weight. Eyesore had a series of US press that happened around their debut EP which felt mad. Getting a KEXP song of the day and a gorgeous feature on Stereogum having never dipped their toes over there felt like a real moment. Hearing Natalie McCool’s haunting vocals playing over an HBO/SKY advert with a harrowed looking Jude Law was a good one. Possibly pulling together a two week exhibition of Beija Flo’s artwork along with a sold out gig at the end which featured her playing three slots in different ways. She basically did both support slots of a her own headline gig. That was a great example of knowing just how far to push her creatively without it getting too overwhelming. I can’t wait to experience future highlights. There are so many moments that make this rewarding.

What do you think are the big challenges for a manager in 2021?

The obvious is the recovery from the pandemic, but I’m hugely concerned about the implications that Brexit is having on my artists. Eyesore played Eurosonic and we had more European dates in the diary than we had UK. It all felt super promising and then they all got pulled due to the pandemic and we can’t look at rescheduling them mainly because of the unfeasibility of the financial impact of Brexit. We’re just constantly looking for focuses in other areas. Right now they’re writing, writing, writing so we can record an amazing debut album. Hopefully the EU situation will be clearer by the time we look at their live strategy again, building audiences outside of the UK in order to enable a stable career. I don’t feel this is possible without a European audience for a band like that.

I’m like a sponge at the moment. I’m obsessed with Self Esteem and I’m so excited for her new album. The first two singles have blown me away, she’s so special. I also love Pillow Queens, Albertine Sarges, CMAT and I’m excited to hear further stuff from Yard Act, Denise Chaila, Wet Leg and The Lounge Society, to name a few. I could go on and on and on.