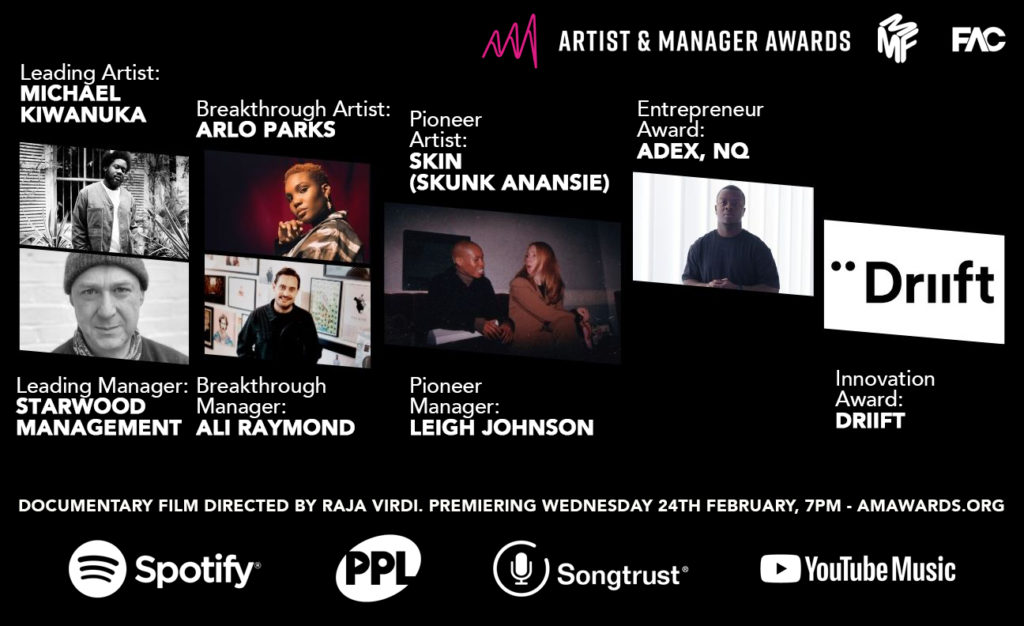 Arlo Parks and Ali Raymond (Beatnik Creative) have been named Breakthrough Artist & Manager, sponsored by Spotify, on the back of an innovative and year-long campaign. This included a spot on the BBC’s Sound Of… Poll in January 2020 and the accolade of BBC Introducing Artist of the Year, before releasing a succession of critically acclaimed singles. Last week, Arlo’s debut album, Collapsed In Sunbeams, entered the UK charts at number 3.

Michael Adex and his team at Northern Quarterz (NQ) pick up the Entrepreneur Award, sponsored by Songtrust, recognising the incredible creative community they are building in Manchester, and their phenomenal success with Aitch – a winner at 2019’s Artist & Manager Awards.

Finally, the FAC and MMF are delighted to present Michael Kiwanuka and Starwood Management (Robert Swerdlow, Dave Nicoll & Mark Nicholson) with our coveted Leading Artist & Manager Awards, sponsored by YouTube Music. Receiving global acclaim on release in late 2019, the soulful power of Michael’s third album, KIWANUKA, resonated throughout 2020 – reaching a number 2 chart position in the UK, and winning the Mercury Prize in September. Proof positive that songwriting and performing talent remains key to long-term success, theirs is undoubtedly one of the most substantial artist-management partnerships of recent years. KIWANUKA has also been Grammy-nominated, and, aside from Michael’s stellar reputation as a live act, his music has been placed innovatively and to spectacular impact in hit TV shows including Big Little Lies, The Get Down and A Million Little Things.

All will feature alongside Skin of Skunk Anansie and Leigh Johnson (LJM), the previously announced winners of the PPL-sponsored Pioneer Artist & Manager award, in a specially commissioned documentary premiering at 7pm Wednesday February 24th on YouTube.

Full details will be posted at the Artist & Manager Awards website – www.amawards.org

Produced by acclaimed director Raja Virdi of Phase Films, the film will serve as an alternative awards ceremony, presenting interviews with all five winners while exploring themes of creativity, resilience, adaptability and entrepreneurialism, documenting the relationships between artists and their managers during the Coronavirus pandemic.

All winners were decided by an initial nominations committee panel composed of artists, managers and other executives across the industry, with further input from FAC and MMF core staff teams.

“The FAC and MMF would like to congratulate all our deserving winners, and thank all our sponsors. Rather than cancel the Artist & Manager Awards we decided to document the resilience and creativity of artists and managers during this difficult period when careers have been disrupted, live shows postponed and life has shifted online. Obviously we all want business as normal to return safely in 2021, but in the meantime we hope this unique film highlights why music has played such an important role during the pandemic.”

“We believe passionately in celebrating music managers, and recognising the vital role they play in helping the UK creative economy to thrive, now more than ever before. We are delighted to be presenting the Leading Artist & Manager Award to the Starwood Management team and Michael Kiwanuka – a most deserved accolade following a phenomenal year in the face of great adversity.”

“Songtrust is proud to support and recognise the vital communities represented by the FAC and MMF through sponsoring the Entrepreneur Award category.  In what has been such a difficult past year for all in music, it is fantastic to see what a remarkable business and music community Adex and the team at Northern Quarterz have built. Huge congratulations to team NQ on this much deserved award from all at Songtrust.”

“We are all delighted for Arlo and Ali and look forward to seeing the documentary film. Being recognised as Breakthrough Artist & Manager is a major achievement, and especially in the current circumstances. To keep up momentum and keep moving forward is truly inspirational.”

The Artist & Manager Awards was established to celebrate achievements in the UK’s artist and manager community.

The Artist & Manager Awards’ charity partner is Attitude is Everything. In 2021, the charity will celebrate a landmark 21 years of working to improve Deaf and disabled people’s access to live music by partnering with audiences, artists and the music industry. Throughout the film, viewers will be encouraged to donate towards Attitude is Everything’s hugely important work as they strive to make live events inclusive for all.