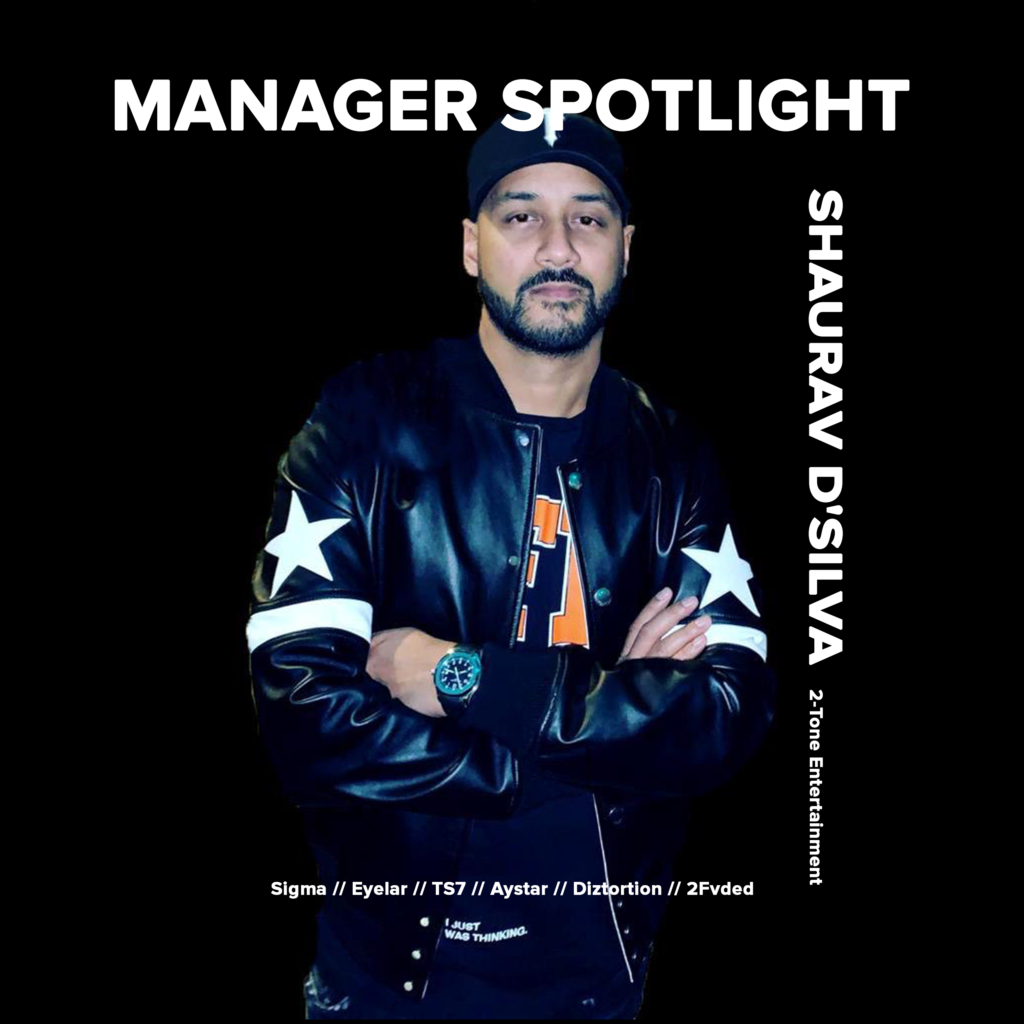 Manager Spotlight offers a small insight into the heads of incredible managers. This week in the spotlight is Shaurav D’Silva of 2-Tone Entertainment.

I have been managing talent for over 10 years now- I started building my relationships with talent as a UK Garage DJ and club promoter back in early 2000’s. Being part of that UK underground club culture initially led me into managing a number of talented producers such as Terror Danjah, Diztortion and Rudimental. Being around Producers in studios was also a great way to discover new artists – so naturally those relationships led to my first few meaningful artist signings.

Our management roster is a really diverse one that ranges from Black Music through to Dance/Electronica and Pop. It is run day to day by our brilliant team of Derek Amedume (Previously manager to producers Parker & James and songwriter Dyo), Mo Ogleh, Charlotte Hazell and Ahren Vassell.

Our most commercially successful client is Sigma (who we manage in collaboration with Jamie Osman @ Real Life Mgmt). I originally signed them as an A&R when I was at 3Beat Records and they have since been on to have back to back OCC number 1’s, multiple Top 10s and a Gold selling debut album.

We also represent an incredible Singer/ songwriter named Eyelar who has really established herself as a top songwriter having written big songs with Demi Lovato, Charli XCX, Little Mix and David Guetta. She has been recently been working on her own solo project thats really starting to gather momentum.

As a company we have also made a real conscious effort to represent more regional based talent- We manage a Midlands based Bass music DJ/ Producer called TS7 and an exciting Liverpudlian rapper named Aystar.

On the producer side we look after Dutch-born producer Diztortion. He has done very well in the UK Rap and Dancehall/ Afrobeat scene with the hits with Tion Wayne, Sean Paul, Bugzey Malone, Stylo G, MNEK and Darkoo to name a few.

We also have a great new Production duo named 2Fvded who are very connected in the rap space and have had releases with Aj Tracey, Yxng Bane and Cadet.

As well as DJ’ing and working closely with producers in the early stages of my career, I was also working within the marketing team of an established UK Black music awards show. There was an “unsigned” competition and I met an exciting young RnB vocalist named Lee Henry who I thought had huge potential. He was really the first artist we signed on management back in 2004. We signed him to an independant record deal with Phil Nugent (Full Crew Productions)- they had already had major success as producers in the 90s with RnB acts like Craig David, Mis-Teeq and Kreuz. While Lee’s project wasn’t a huge commercial success it was a great learning curve for me and we managed to play a lot of live shows around the country including some dates at Jazz Cafe with legends like Ne-yo, Floetry and Omar. Omar’s manager Lucia Fiore became an amazing mentor and friend to me- she introduced me to some of the best musical creatives I’ve ever met and showed me how to work the live circuit with an iconic artist. I was so fortunate to have people like Lucia and & Phil supporting me and guiding me in the early stages- it really homed my skill set and gave me a real understanding of how the music industry really worked.

To be honest- most days are good days. Im really blessed to work with people I really respect and admire. Creating new opportunities or seeing them break out of their comfort zones always makes me feel a sense of achievement. Celebrating all the small wins like NMF or 1st big radio spin are really important things to do to give your artists confidence and momentum.

A bad day involves dealing with people who don’t respect the creative process or manipulate a situation for their own benefit without any regard for how it may affect others. We are all dealing with a lot emotionally at the moment with the pandemic and the Black Lives matter movement and its really frustrating to still see people not showing due care in some cases for peoples well being.

Its so hard to pick out one moment- every one we represent has had their own success that cant be compared to anyone else’s success. My best highlight of 2020 (and what a year its been!) was watching Demi Lovato perform “Anywhere” at the Grammys in LA (a song that Eyelar co-wrote). It was a spine tingling moment- especially with the back drop of her story of fighting addiction and knowing how the song came together in such a spur of the moment way.

The pandemic has of course meant that so many managers have had to totally re-strategise their business model for the next few years. The lack of live income means we are being forced to look at how we can increase our revenues in digital / social media and branding as well as recorded and publishing income. The ability to really focus time on the music creation  has also been hugely affected as managers now have so many social platforms to run and maintain. Having a great team like mine is more important than ever. I also think that managers have now had to become multi skilled record label executives as so many artists want to self-release. Having a great understanding of that release process and also having the relationships to help get attention at DSP’s is an area that managers have really had to work on developing their skills in.

Honestly- I’m so lucky- because our business as a whole operates across Records/ Publishing and Management we have so much music coming in from our own roster we don’t really ever have a shortage of great music to listen to. In terms of external stuff there are so many great new artists and scenes developing. I’m currently loving the Bootleg Boy channel on Youtube- Its low-fi rap / sad songs has a real mood and community that makes it feel very unique. Artists like  Powfu (“Deathbed”), and Kina (“Get You To The Moon”) started on that channel, so its interesting to see their growth into more commercial spaces. I also love Holly Humberstone- shes a really exciting new singer/songwriter who is writing great songs. Big shouts to her manager Josh Sanger at Closer Artists- he is showing the world how grass roosts artist development should be done and the importance of the A&R process being super tight in the early stages.