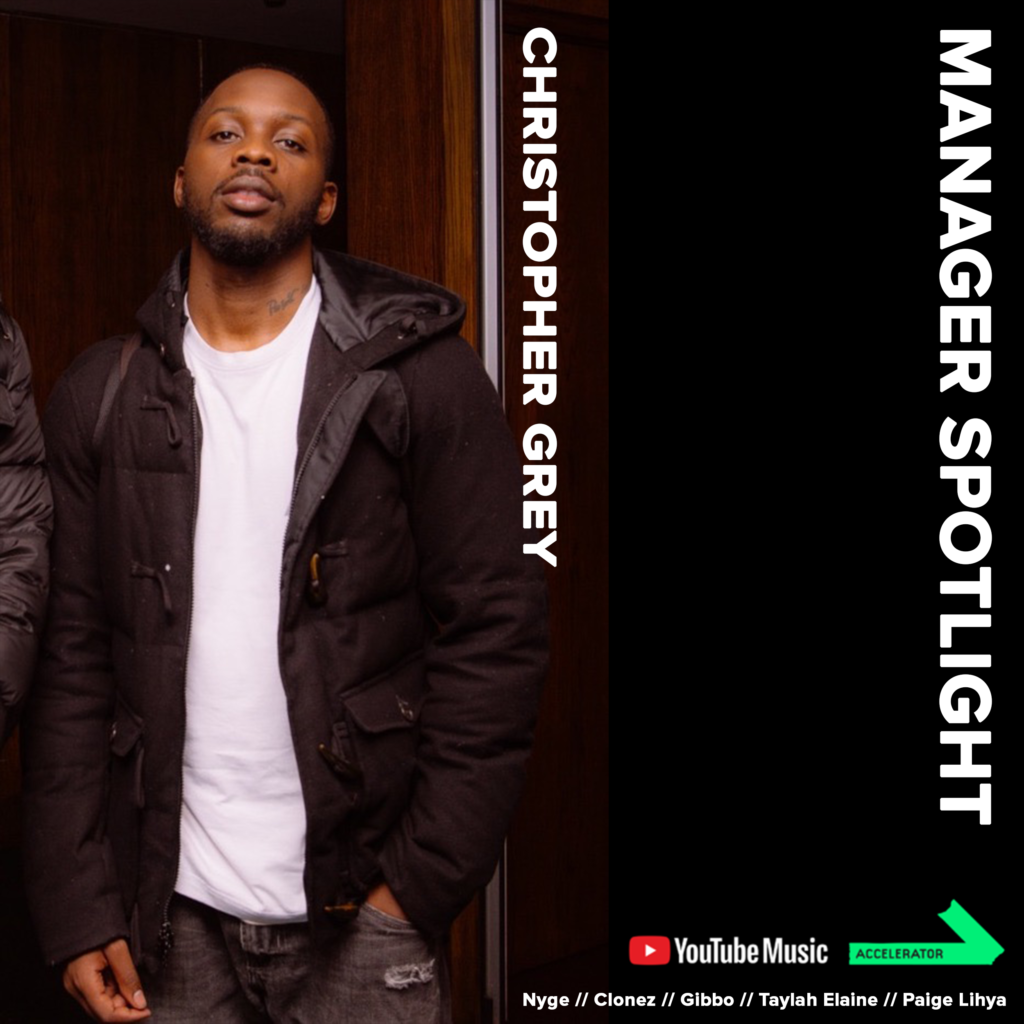 Manager Spotlight offers a small insight into the heads of incredible managers. This week in the spotlight is Christopher Grey!

I have been working in music for 5 years but I began getting into management late 2016 / early 2017.

My actual initial goal was to get into A&ring rather than management funny enough. So i took it upon myself to learn as much about the industry and gain experience where I could. I attended seminars hosted by an initiative called Urban Development, which used to have panels talking about various sections of the industry. From that I was able to land an opportunity working with an artist manager who was looking after rappers Bonkaz & Yxng Bane at the time. I began by doing all the day to day management for them. Then I was drafted in to help put together an album under XL Recordings called ‘NEW GEN’ via the connections I had made. That album was entirely produced by 3 producers, one of which was Nyge. We grew an organic relationship over time and I naturally began helping him with his career, which led to him becoming my first client.

I think it was mixture of believing in his talent , and understanding that we was both in a position to help build the culture of black music within the UK as the appetite for this genre of music was beginning to breakthrough. Aside from that I was just hungry and passionate to do anything to help a friend and get my foot in the door of a segregated industry.

I think a good day is when you have list of tasks you’re trying complete and you’re able to tick them off. The industry can be quite a distraction between all the travelling, meetings, phone calls etc you sometimes let things slip through the cracks etc. I find the best days for me are when i’ve taken care of all the admin based work and can enjoy the planning and execution of the creative ideas and getting product out into the marketplace. It’s always good when a deal, placement or booking has been confirmed also.

A bad day can come in various forms whether it be a last minute change of plans or delays that derail weeks or months of hard work towards a release or launch. Having to chase down money that’s owed to you, or the constants battle of trying to make sure your clients are not being undervalued or taken advantage of, a pandemic which destroys all live plans that would have been a great opportunity for branding, exposure and money. The list goes on…

There’s been a few but I think not being comfortable and pushing the boundaries with Nyge as a producer has helped diversify his career but gives the company opportunity to be flexible in the activity we take part in. We was deliberate in making sure Nyge wasn’t a faceless producer. Yes he has worked with the biggest rappers the UK has to offer but he began putting out music under his own name, which led to a two single deal with Virgin Records. He signed his publishing with BMG in 2018 and is AJ Tracey’s official DJ. All that activity has allowed us to leverage it into a label deal with ADA to put out records as a company with funding to support our releases. It will be a huge highlight to still help build careers of the talent we believe in but also be flexible and explore other areas of growth so we are not restricted to one area of business.

Firstly, I think with the virus that has put a lot of challenges on managers in terms of executing plans for the year from live to releasing music in the manner which maximises the potential and exposure of the record.

Secondly, there will always be a challenge of how do you fight through the noise of getting your act heard. If you’re developing an act and you’re in the beginning stages how do you build their platform and fanbase with limited resources, especially if you haven’t got a team to help share the workload also. A Manager has to take on various roles outside of the title to get the job done.

I know for myself i’m think about how to get over the challenge of not just having activity domestically but how to build the narrative around my acts internationally.

Its always a mix but mostly as of this week its been Gunna, 112, Kehlani, Jagged Edge, Don Toliver, Headie One & Millionz.