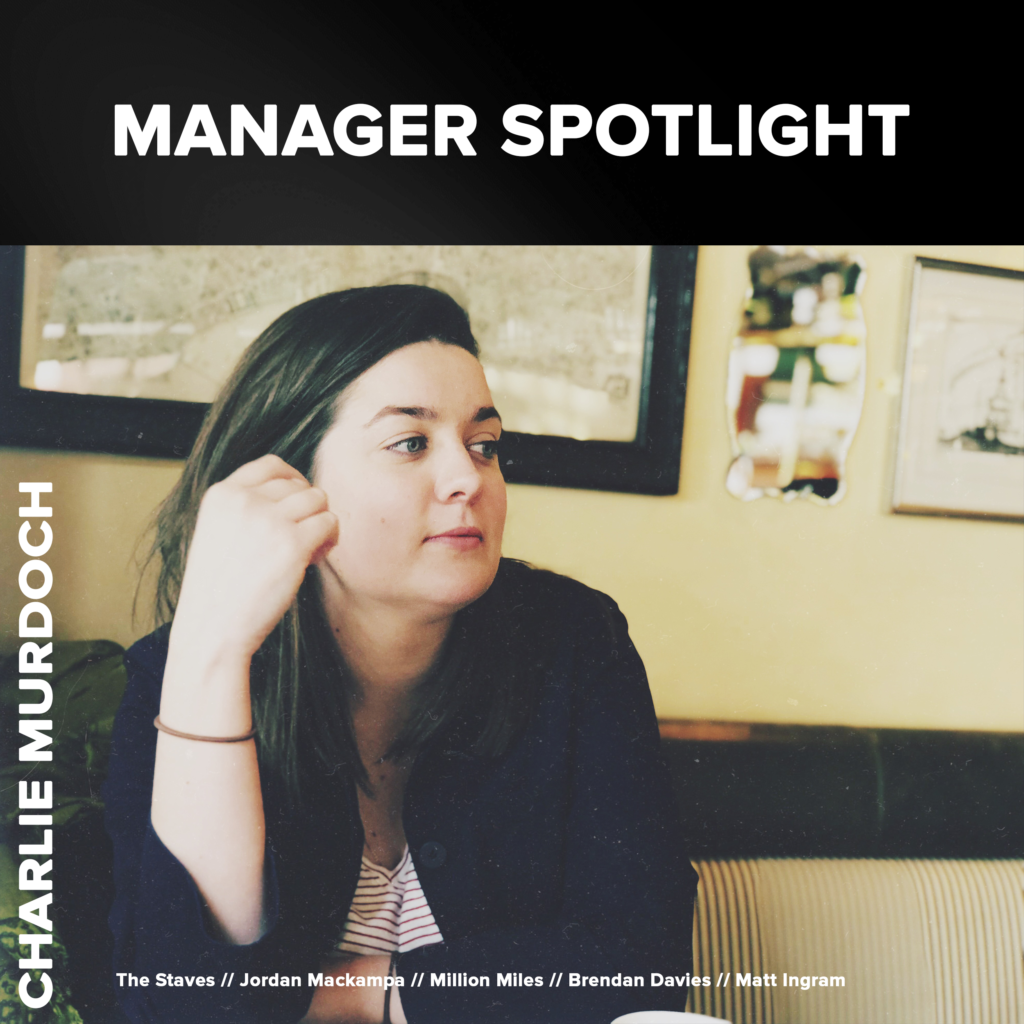 Manager Spotlight offers a small insight into the heads of incredible managers. This week in the spotlight is Charlie Murdoch!

I manage artists; The Staves, Jordan Mackampa and Million Miles as well as producer/songwriter Brendan Davies and Matt Ingram.

My first client was Jordan Mackampa. We were both pretty young when we met but I think that helped a lot. In the naivety (or arrogance) of our youth, we weren’t plagued by fears of the obstacles we might face, or financial restraints – and most importantly, we weren’t hemmed in by traditional ideas of how to release music. We were able to take our time and work in our own way, on tiny budgets, because really, we didn’t know any better, but we were eager, ambitious and hard working.

I was 21, interning at a record label and he was still at uni. We met a festival through friends, and it turns out we had actually gone to the same secondary school although had never crossed paths. He started singing one night and his voice was and still is pretty unignorable. We stayed in contact after that; he’d send me music and when a couple of people started reaching out to him, some wanting to help, some wanting to take advantage, it all just sort of fell into place. From very early on we had an understanding and short-hand with each other that has helped a lot over the years. There’s always been a trust that we have each other’s backs even when times have been tough.

A great day for me is generally when everything runs on schedule. I’m pretty hands on and like to be present as much as I can be for all my clients. I’ve toured a fair bit over the years, so I’ve learned to truly appreciate a schedule going to plan – although it rarely happens. This could be anything from photo/video shoots, to studio recordings to live dates to just meetings running on time. The best days are when everyone is on the same page and pulling in the same direction with the same level of enthusiasm. Any day a well-paid sync comes in is pretty nice also.

There have been a fair few bad days of late. Delivering bad news to your artist is always awful, but having to deliver the news of rescheduling tours that have been in the works for 6 months and festival cancellations has been pretty gut retching. As a manager, you see more than anyone the impact bad news has on the artist in every facet of their lives; personally, professionally, financially and mentally. Our job is to find solutions, but knowing everything is completely out of your hands makes management pretty difficult at the moment.

I love little victories and really take pride in the small wins. It’s a mentality that has kept me going over the years and a way to keep optimistic particularly in the early years when things seem slow. Every small milestone we celebrated as if we had just sold out Wembley.

Opening the Freak N See studio with Million Miles in LA felt like a really great achievement and it’s been a joy to have a space over there. Another memorable occasion was Million Miles playing Rockwood Music Hall in New York. It felt like such a novelty to me at the time. It was the first time that I, as a manager, had taken an artist to play a show in New York, the full room and her amazing playing (as always).

Releasing Jordan Mackampa’s debut record ‘Foreigner’ was pretty incredible as well; getting to that moment was a real achievement. After his album launch party, I walked home listening to the record and thinking about where we had started from and was overcome with pride. I must have looked like the Cheshire Cat.

There are a couple of others that spring to mind, the most recent sold out Staves tour; I was really proud of that run, the shows were AMAZING, the band were awesome and the whole process got me really excited about their future. Exciting things are in the pipeline.

What do you think are the big challenges for a manager in the current COVID-19 situation?

The fact that the current situation has no timeline and takes complete control out of yours and the artists’ hands is incredibly challenging on every level. There’s no real solution so we’re working with what we have and trying to think creatively within the restrictions. It’s really easy to fall into despair when everything is crumbling but being positive, focused and malleable in the face of the changing tides is the best we can strive for in the current climate.

Young in the City’s “Annie” & Dua Lipa “New Rules” & Dolly Parton & Chet Atkins “Do I Ever Cross Your Mind” always brings back nice memories of late-night drives on tour so I’ve been listening to them a lot recently.

Most mornings I wake up to Peter Gabriel’s “Sledgehammer” as well. I listen to this track at least once a day and I’m convinced it’s the trick to having a good day.