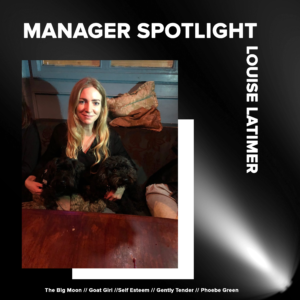 Manager Spotlight gives us a small insight into the heads of some excellent managers. This week in the spotlight is Louise Latimer.

How long have you worked in management?

First client I worked with as a self employed manager was Palma Violets. I can’t take credit for finding them as my co-manager Milo did, but I decided to manage them with him because they were the best live band I’d ever seen. It felt like every single show they played was a ‘I was there’ moment… so doing a job where I could actually be there in all those moments was an absolute no brainer.

Good day – Album release days are always very fun – suddenly my inbox is filled with emails with exclusively good news and it feels like I can breathe out for the first time in a while.

Bad day –  Anything involving Visa applications. If, for any reason I do end up hell when I die, hell for me will be me constantly halfway through a DS-160 form that never ends – whilst simultaneously hearing the band have lost their passports.

Probably The Big Moon being nominated for a Mercury… they didn’t win it, but the nomination alone carries such weight and it was the tipping point we needed and the recognition they deserved. Someone told me when I first became a manager that the manager/client relationship should always be strictly business- not friendship, because when feelings get involved things get messy. I’ve done the complete opposite of that – management is so much more rewarding when it feels like family because you’re always going to work harder for people you love. Telling a band who are like family to you, that they’d been nominated for a huge award was a pretty incredible feeling.

Speaking from the perspective of a manager in the alternative sphere with still relatively new acts  – I think the biggest challenge is how much time and graft goes into a project before anyone is making any real money. Obviously there are exceptions to this rule, but generally artists have to tour tiny venues on a shoe string and managers have to work countless hours for little or no commission developing an act for a long time before seeing any financial returns. So the belief in the project on both sides has to be watertight.

I also think mental health is an important thing for every manager to address and carefully monitor – it feels like the music industry is waking up to it more than ever in the past couple of years. Being an artist does not lend itself to easy/regular life schedules and I also think it’s easy to forget how intense a process it is to create music and then let the world judge it, publicly. I think it’s important as a manager to be sensitive to that and support/protect however we can. Also, on the flip side managers carry such weight of responsibility for their acts and it’s very easy to just work every waking hour because there’s no end to what you could be doing for them. It’s important to find a balance.

I am still obsessed with the latest Kevin Morby album ‘Oh My God’…  Georgia’s album on Domino… Lankum’s album ‘The Livelong Day’ is a beautiful folk record that came out on Rough trade late last year… Big Thief are so consistently easy on the ear… To be honest I mostly like listening to old music as it helps me take my mind off work… Nina Simone, Sandy Denny, Leonard Cohen … Guy Garvey’s finest Hour on 6 Music too!