Home / MMF Updates / The Music Managers Forum has announced five new board members at its AGM, following its first ever Management Summit.
< Back to articles

The Music Managers Forum has announced five new board members at its AGM, following its first ever Management Summit. 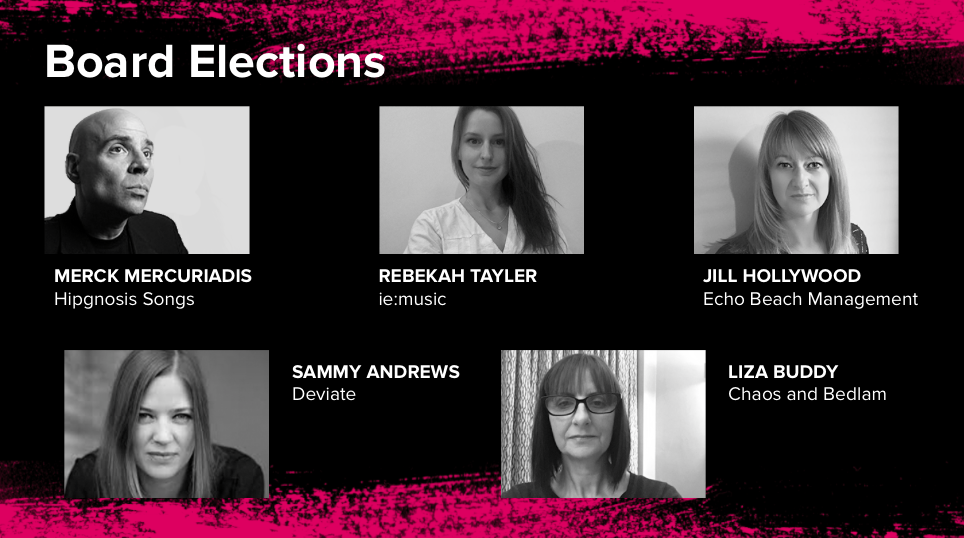 The MMF represents the world’s largest community of music managers – with almost 700 members based in the UK.

The appointments were revealed this evening at the organisation’s AGM, held at 100 Barrington, following the MMF’s first ever Management Summit – a full day of management-focussed discussions, debates and workshops.

All new board members will serve a fixed three-year term and add significantly to the depth of commercial experience that the MMF can draw upon.

Rebekah Tayler (ie:music) has worked extensively on the global success of Passenger – helping oversee the release of 7 albums in 7 years, including 3 self-released albums where all marketing and distribution was undertaken in-house. One of these self-released albums achieved a Top 5 placing in the UK album chart. Passenger’s reputation as a live performer has seen him embark on everything from busking tours to stadium supports for Ed Sheeran.

Sammy Andrews is CEO of acclaimed digital marketing agency, Deviate Digital, and manager of Goldkey (featuring former members of Gallows, Sikth and Spycatcher). She is also a leading industry campaigner as founder of Let’s Be The Change and Music4EU, as well as a hugely respected public speaker and Music Week columnist.
Liza Buddy is a funding and investment specialist, who has advised and overseen successful applications for a variety of managers, labels and artists – securing grants from PRS Foundation’s Momentum and International Showcase Fund, as well as Arts Council England. She manages upcoming artists TOVA and Killjoys through her company Chaos & Bedlam.

“I am absolutely delighted to welcome Jill, Merck, Rebekah, Sammy and Liza to the board. All are strong-minded individuals with awesome credentials and I’m sure they’ll make a deep and valuable contribution to the MMF, ensuring the organisation continues to lead industry debate and support the careers of our members.”

“Our five new board members are all experts in their field, and will make the MMF an even stronger and well-rounded voice as we continue to deliver truly groundbreaking projects such as our Dissecting The Digital Dollar publications or the Accelerator Programme for Music Managers. I would like to thank all of them for coming onboard, as well as our departing board members – Andy, Claire, Diane, Stephen and Tom – for their engagement, energy and contributions.”

In order to promote greater diversity and inclusion, and to ensure a wider representation of managers’ perspectives, the MMF introduced new voting processes two years ago – with elected board members required to serve a fixed three-year term, and at least five members required to stand down or stand for re-election each year.

The full MMF board is now as follows: