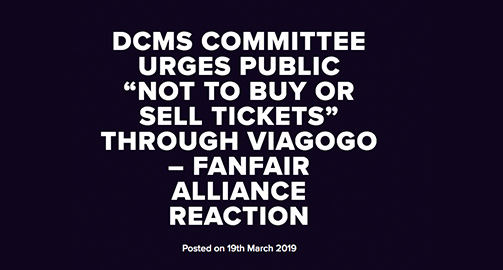 This morning, the Digital, Culture, Media and Sport Committee has published a new report, calling for action to safeguard the future of the UK’s live music industry.

The report places particular emphasis on the practices of viagogo, and MPs have issued the public a “stark warning” to avoid the notorious secondary ticketing website.

Viagogo is currently facing a legal action for contempt from the Competition & Markets Authority (CMA) for failing to comply with a court order issued in November 2018. Representatives from viagogo failed to turn up to successive Select Committee evidence sessions on “ticket abuse”.

In a statement, the Committee said:

“We believe that viagogo has yet to prove itself a trustworthy operator given its history of resisting compliance, court orders and parliamentary scrutiny, and flouting consumer law.

“We are concerned that while that work takes place, consumers remain vulnerable to the site’s misleading sales practices. It is imperative that the CMA acts promptly and decisively to bring viagogo into line with consumer law and, until it does so, we advise the public not to buy or sell tickets via viagogo.”

FanFair Alliance has warmly welcomed the report, and issued the following reaction:

“FanFair Alliance welcomes all aspects of the Committee’s wide-reaching report, and especially their condemnation of Viagogo.

“What we now need is action.

“If a restaurant poses a risk to public health, we expect inspectors to close it immediately on grounds of consumer protection.

“Unfortunately, such powers of enforcement are seemingly absent when it comes to online ticket touting. So despite the huge consumer harm caused by Viagogo’s practices, and despite the best efforts of the Competition & Markets Authority and other regulators, the site has continued to operate in clear disregard of the law.

“This needs to change. Viagogo is already facing legal proceedings for contempt of court. While that case is pending, there is surely a compelling argument for the website to be temporarily blocked and for platforms like Google to cut off its advertising.”

The full DCMS Committee report can be downloaded here.

The following recommendations are also made in regards to ticket resale:
– To give fans a quicker and easier process to resolve secondary ticketing disputes, because poor experiences risk blighting people’s enjoyment of live music and drain money out of the industry
– For Government to review effectiveness of the Breaching of Limits on Ticket Sales Regulations 2018 and publish a review of the regulations – to ensure the legislation is workable, and can tackle all ways by which touts harvest tickets
– For Government to set out the responsibilities of companies such as Google to ensure that advertisements from secondary ticketing websites comply with consumer protection law