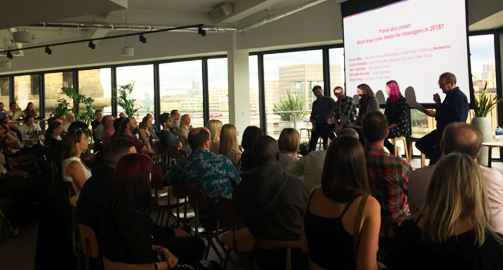 We were delighted to host a sync panel on the 20th June as part of the MMF AGM and summer party at Kobalt HQ in London. The panel boasted an esteemed and varied group of sync experts, discussing how managers can maximise sync opportunities for their artists. Speakers included Michelle De Vries (Music Supervisor), Alex Sheridan (CEO, One Two Many), Louisa Rainbird (Head of Creative & Television at The Music Sales Group), Simon King (Covert Talent Manager) and the panel was moderated by David Wille (SVP Sync & Brand Partnerships at Kobalt).

We have all witnessed emerging artists whose careers have been transformed by sync, whether that is growing a fan base in a territory never before accessed, providing the pivotal funds needed to launch a successful DIY release campaign, or gaining much-needed exposure required to land an artist their first record deal. Sync is a really powerful tool to connect artists with potential fans, to reach a broader consumer group and to monetise music-making – with the potential for a track to reach as many people (or more) as it would on an A-Listed playlist on a popular radio station. A great example is Tom Walker who is managed by Simon, Tom’s single ‘Leave A Light On’ which has been included in hit TV shows Love Island and Grey’s Anatomy and has now surpassed 100 million streams on Spotify. Another example is Saint Motel’s track ‘My Type’, the song’s chorus includes what must now be one of the most recognisable saxophone melodies heard across the UK, Europe and USA over the last four years, due to its extensive use on adverts, TV and film.

Repeatedly using the same artist or track in various adverts/films/TV productions is something the panel touched upon at the AGM. According to the speakers, when Music Supervisors find an artist they love, they will often turn to the same artist’s music again and again – this is worth considering when building relationships with music supervisors or when deciding whether to accept a sync offer with a low fee. Find out how many times previous artists’ tracks have been used by the same production company/network – if there is evidence that your artists music could be used 5, 10, 20 times on other TV/Film projects, an initially low paid sync opportunity could become a more financially lucrative and sustainable option in the long run. The speakers suggest looking at the PCAM to check benchmark rates to negotiate sync fees. Additionally, the exposure gained from some sync opportunities may generate a much larger investment as a direct result of the fan-base acquired through the sync. In some cases, a track can have a decades-long association with a particular scene or theme tune. For example; the Gilmour Girls TV theme tune ‘Where You Lead’ by Carol King & Toni Stern brings King’s music to a new generation of fans. Aerosmith’s ‘Dude’ is also still likely to pop into the heads of many people, each time they use a vacuum cleaner due to the use of the song in the 90’s hit movie Mrs Doubtfire – creating longevity for a track that is arguably hard to sustain outside the world of music sync.

The panel acknowledged that sync opportunities are highly sought after and getting a piece of your artists’ music selected in a popular film or TV series is often difficult and incredibly competitive. However, it was highlighted at the event, that due to the cost of orchestrated scores, many TV, Film, Games companies are increasingly opting to go to contemporary pop/rock/electronic artists to score soundtracks. Daughter recently scored the soundtrack to the computer game ‘Life is Strange: Before The Storm’ which was the first time the act had delved into soundtrack composition.  Mogwai are another band who have built their career within the traditional indie music structure but have moved into soundtrack composition, scoring for TV shows such as the French production Les Revenants. The panel reiterated that getting into film/TV/Game scoring is also incredibly competitive and many producers use artists they like, trust and who have a track record of delivering scored music for similar projects. That being said, the panel suggested that if your artist does have a desire to begin scoring film and TV, it is recommended to look at Kickstarter to see what small-scale films are in production. Scoring small films may initially entail working for free or for very little, but it will allow your artists/composer to build up a strong CV of soundtrack work, and potentially lead to your artist being asked score for larger productions in the future.

Research is critical when you want to get your artist’s music used on film/tv/games. When thinking of music sync, many people think of acoustic tracks with haunting female vocals like the tracks often chosen for John Lewis Christmas adverts. However, it was interesting to hear the speakers say that, while there are not a vast number of music trends in sync, this is a trend that they believe is on the decrease. A Nordic noir-style crime drama is more likely to want a haunting, ambient, electronic piece of music – whereas many gaming companies can be looking for high octane rock and hip-hop tracks. Do your research, find out what is in production and what sort of music fits with that particular film/TV/game so you can target the relevant music supervisor. It is not advised to send an upbeat reggae track to a music supervisor who is selecting music for a brooding, dark, crime drama.

Track preparation is important – make sure your artists’ tracks are correctly labelled in a folder so they can be easily identified. It is also vital that there are mastered instrumentals and full versions of each track in a wav format with the relevant metadata included. This makes it quick and easy for Music Supervisors to add your artist’s music to their production, without having to spend time hunting down alternative file formats and additional information.

To conclude, Michelle De Vries mentioned that one of the most rewarding parts of being a music supervisor was being part of a new artist’s success story. Despite it being difficult for an emerging act to secure career-changing success in the world of music sync, there are still excellent opportunities out there for talented, tactical and hard-working artists and their teams.