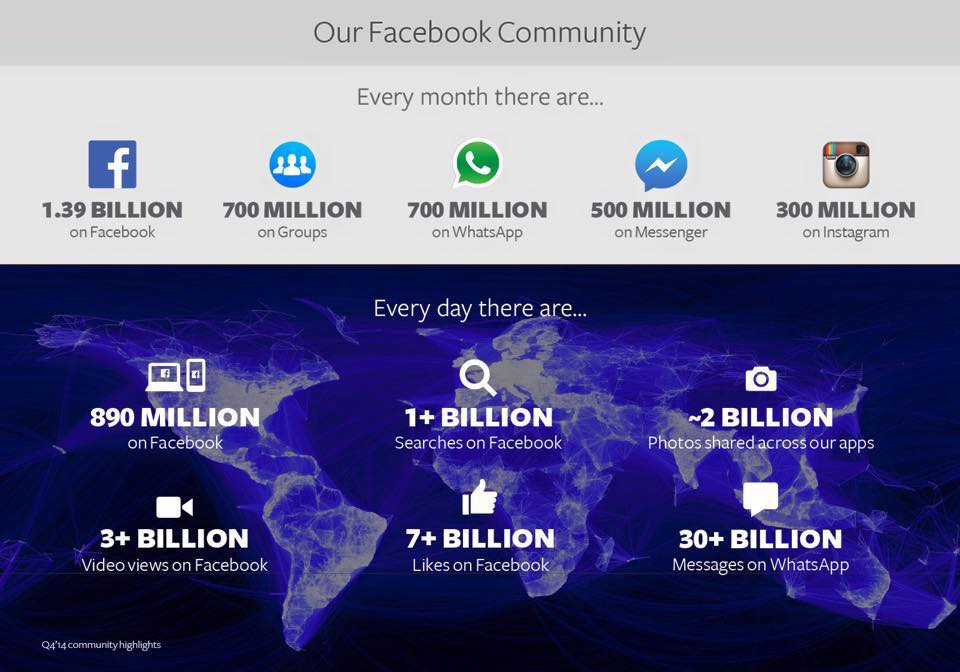 Recently, MMF members gathered at Facebook’s HQ in London to learn the best insider knowledge on content and marketing. We learnt some key points from the event, listed below. For further insights and information on Facebook’s best of practice, you can request to join this group https://www.facebook.com/groups/492041434220700/?fref=ts

The world is mobile. There are now more mobile phones than there are toothbrushes so as an artist, to be thinking in terms of the future, you need to be thinking for mobile. Mark Zuckerberg doesn’t allow any new coding for Facebook out the door before he has seen what it looks like on the small screen

One in every five minutes spent on the Internet is spent on Facebook and 80% of that time is spent on the Newsfeed. Realistically, you are the only person that looks at your own page, so while its nice to spend a lot of time making your page a nice place to visit, it’s actually all about how you appear on the Newsfeed. So with everyone continuously scrolling – how do you put something out there that they’re going to stop their thumb at?

…is one of the most important things to remember when posting. If you’re struggling to think of something to say – don’t say it! Because it won’t be authentic. Everything you post has to be done at the right moment for you, when you feel the need to put something out there, your fans will gauge the real you, which is far more special to them than bland, for-the-sake-of-posting updates.
An easy way to do this is to pick five things that represent you, and make sure that each post represents at least one of these five things.
Additionally, Facebook’s algorithm can also pick up on any sales type language such as ‘Like This’ or ‘Buy Now’ and it also HATES YOU SHOUTING IN CAPITAL LETTERS, so will downgrade all posts that include these attributes. Don’t be spammy.

Make sure your content is always relevant to you. Many brands make the mistake of posting seemingly random questions or updates in an attempt to start a conversation, such as “What are your News Years resolutions?” Remember the Newsfeed? You’re going to look like everyone else and therefore unoriginal and uninteresting. Bring your flavour to every post, including those that are holiday-related or involving popular culture, and current affairs.
In terms of volume of posts, one a week is optimum as a guideline. Facebook recommended no more than 7-10 posts per week and this is pushing it. Or you could make like Crystal Fighters and post twice a year (they get huge engagement partly because these posts are at exactly the right time for them – see authenticity above)

2013 was the year of the ‘Like’ , 2015 will be the year of the ‘Share’.
Shareability of content is very important as it will extend your reach. The widespread rumour that you can only reach 100% of your subscribed ‘Likes’ if you pay for ads is simply not true. With the right post, you could actually reach beyond your subscribers. For example, when Darth Vader posted a selfie on the UK Star Wars page, despite the page only having 700,000 likes, the post reached 22 million people.
Royal Blood is a great example of this. Since they hinted at the release of something special, they have been changing their profile picture every day – often to something that looks pretty strange or surreal, perhaps stills from a video shoot. This has created huge engagement with plenty of sharing and commentary. Even though they haven’t said a word.

Video has now become huge on Facebook. They play automatically on the Newsfeed but without sound so ensure you capture your audience in the first three seconds with the image. Uploading directly to Facebook will always perform better than a third party link.
Facebook is becoming the place for discovery in video before the content is searched for on YouTube so use facebook to post short, teaser videos. Gorgon City do a great job of this with their fifteen second clips.

As a Facebook-owned company, Instagram posts also perform well. This platform is also huge, particularly if you have a younger fanbase. Make sure you don’t go heavy on the hashtags – two maximum is all that is needed.
Another tip is to make sure that your Instagram wall is well-curated, it needs to look consistent. Check out The 1975 for a great example of this.

There is no point in spending money on boosting posts or targeted ads until you have your content strategy working well for you. When you’ve got everything right and you can see the levels of engagement reacting to various types of posts, you will have a more informed knowledge of your fanbase and can therefore make smarter decisions about where to spend your money.
Ads should be used for the things you want fans to buy. Multi-product ads are a great way of doing one ad that showcases three things. For example you could list a live date tickets alongside a merch product for that tour and your album.

There are no rules. This information provides a fantastic guideline for marketing and following these will certainly set you up on a path to getting more out of Facebook. However, what makes artists such a creative and entrepreneurial bunch is their constant ability to push boundaries, so don’t be afraid – go for it! You could be the exception to the rule. Even though there are none.