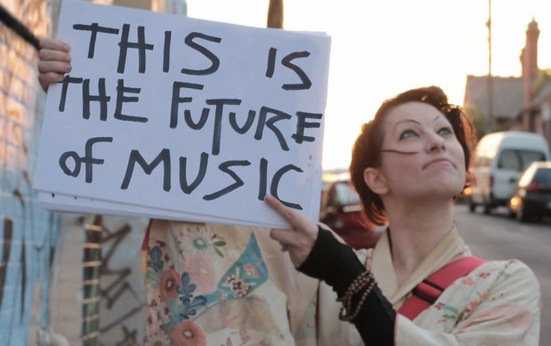 Amanda Palmer is to receive the 2012 Pioneer Award at this year’s ceremony. The award has been created to highlight exceptional individuals who are forging new pathways in the music industry.

Palmer has achieved commercial success and critical acclaim for both her music and her forward thinking approach to funding. Earlier this year she raised over $1million dollars from her fans to fund her album via Kickstarter and she also previously made headlines when she achieved $19,000 of merchandise sales in 10 hours by selling directly to her fans through Twitter.

Amanda, who is collaborating with awards sponsor Spotify to create a playlist of artists who have inspired her, said:

“The future of the music ‘business’ is blindingly bright… you just need to know which direction to look in. The mainstream structures, now collapsed or collapsing, are still on the wrong track, since they keep asking what the NEXT model is. The truth is: there is no next model. Show me 1,000 talented musicians, each with a unique style and personality, and I’ll show you 1,000 ways to make a career in music… there is no longer an off-the-shelf solution. My Kickstarter was exciting, but it’s just the tip of the iceberg. What artists and their audiences will make possible, now that they’re able to connect directly without the aid and criticism of the machine, is going to astound all of us, including me… we’ve only just barely begun a new era of authentic connection with each other.”

“I’m honored to be given an award like this… but I’ll accept it on behalf of myself AND the 24,883 folks who backed my Kickstarter, every one of which helped show the world that enthusiasm for supporting artists and their ventures is – contrary to sky-is-falling attitude of the old music business – alive, well, kicking and, most importantly, WORKING.”

Jon Webster, MMF CEO, commented: “We are delighted to recognise innovation in the music space and Amanda Palmer typifies the pioneering spirit that great artists have.”

The Artist and Manager Awards 2012, sponsored by Spotify, will be held at The Troxy on 27th November. Tickets, in partnership with Ticketscript via their e-ticket system, are now on sale at  www.amawards.org. If you’re a member of the MMF look out for details of how to purchase discounted tickets in tomorrow’s Circular.

The FAC and MMF are also pleased to announce that they will once again be offering philanthropy tables this year. Companies who purchase these tables will have the opportunity of being seated with entrepreneurial artists and managers who are shaping the new music business